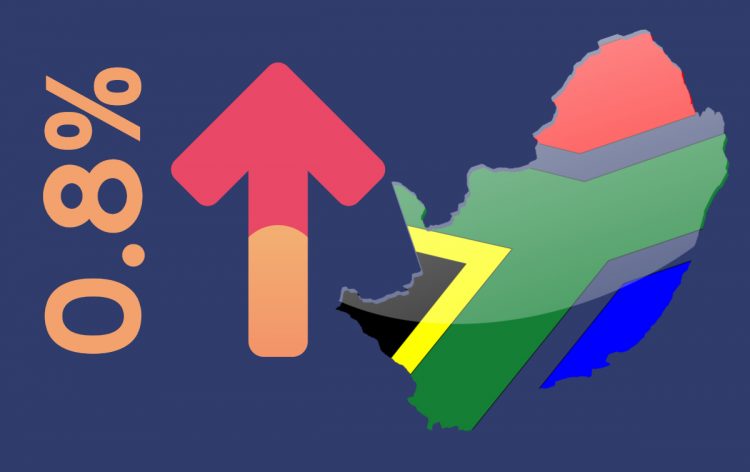 At the beginning of April 2018, The World Bank predicted that the economic growth in SA in 2018 would be 1.4 percent, however, over time the bank changed an initial estimation and cut it down to 1 percent. According to the statistics that came out recently, the actual growth was 0.8 percent. 2018 was not an easy year for the economy in South Africa. Especially in the first and the second quarter when the country found itself in an economic recession, which was the second recession since the 1990s. During the first quarter, the economy was shrunk by 2.7 percent and by another 0.5 percent in the second one. Despite that, South Africa managed to have positive growth in the third and fourth quarter, when the economy grew by 2.6 and 1.4 percent respectively. It contributed to the overall growth rate of 0.8 percent of the whole 2018 year.

What contributed to the growth?

The statistics of the South African economy in 2018 shows that the contribution of the private business and new technologies in the gross domestic product of SA is growing. The traditional industries that have been leading the SA economy in recent years are lowly reducing, however, they are staying to be a huge part of the economy. The largest contributor to the South African economy in 2018 was the finance, real estate, and business services, these sectors increased by 1.8 percent during the year. The second largest contributor to the growth was the government, it expanded by 1.3 percent. These industries contributed 0.6 of percentage points to the overall growth of the economy. The other industries that grew were transport, manufacturing, electricity, and trade.On the other hand, the traditional industries including construction, mining, and agriculture saw a decrease. Mining activity reduced by 1.7 percent, gold, copper, and iron have shown the biggest decrease. The production of gold fell by 14.5 percent, which is the biggest annual slump since 2008. Copper production saw the biggest fall since 1981 as it was decreased by 28.5 percent. The construction industry also had the biggest downfall in two decades as the activity fell by 1.2 percent.

Just like in the previous year, The World Bank has changed the prediction for South Africa’s economic growth for the 2019 year as well. In June 2018, the bank predicted that the growth would be approximately 1.8 percent. However, at the beginning of this year, the World Bank has changed its prediction and set it up to 1.3 percent. The main reasons that were named behind the change were the challenges in the mining sector, policy uncertainty, and low business confidence. As the statistics of 2018 show, the mining sector has truly struggled and it is unlikely that the trend will change. At the same time, the business has increased and South Africa had already started actively working on the policy, which can be promising for the higher results in the ongoing year. There are two main factors that can affect SA economy growth in 2019 in a negative and positive way. Currently, the Eskom crisis is a hot topic in SA alongside debt, which can reduce the SA economy growth if not addressed effectively. On the other hand, some of the institutions, for example, Goldman Sachs have predicted a higher growth of 3 percent, which can be helped by strong global growth and Ramaphosa’s reforms. As the president of South Africa has put attraction of foreign investments as one of the main tasks in the political agenda. According to the World Bank, the country will have a slow but stable economic growth in the upcoming years. The bank expects South Africa’s economy to grow by 1.7 percent in 2020 and 1.8 percent in 2021.